Stars rebound after weekend to defeat Tigers in 3 sets 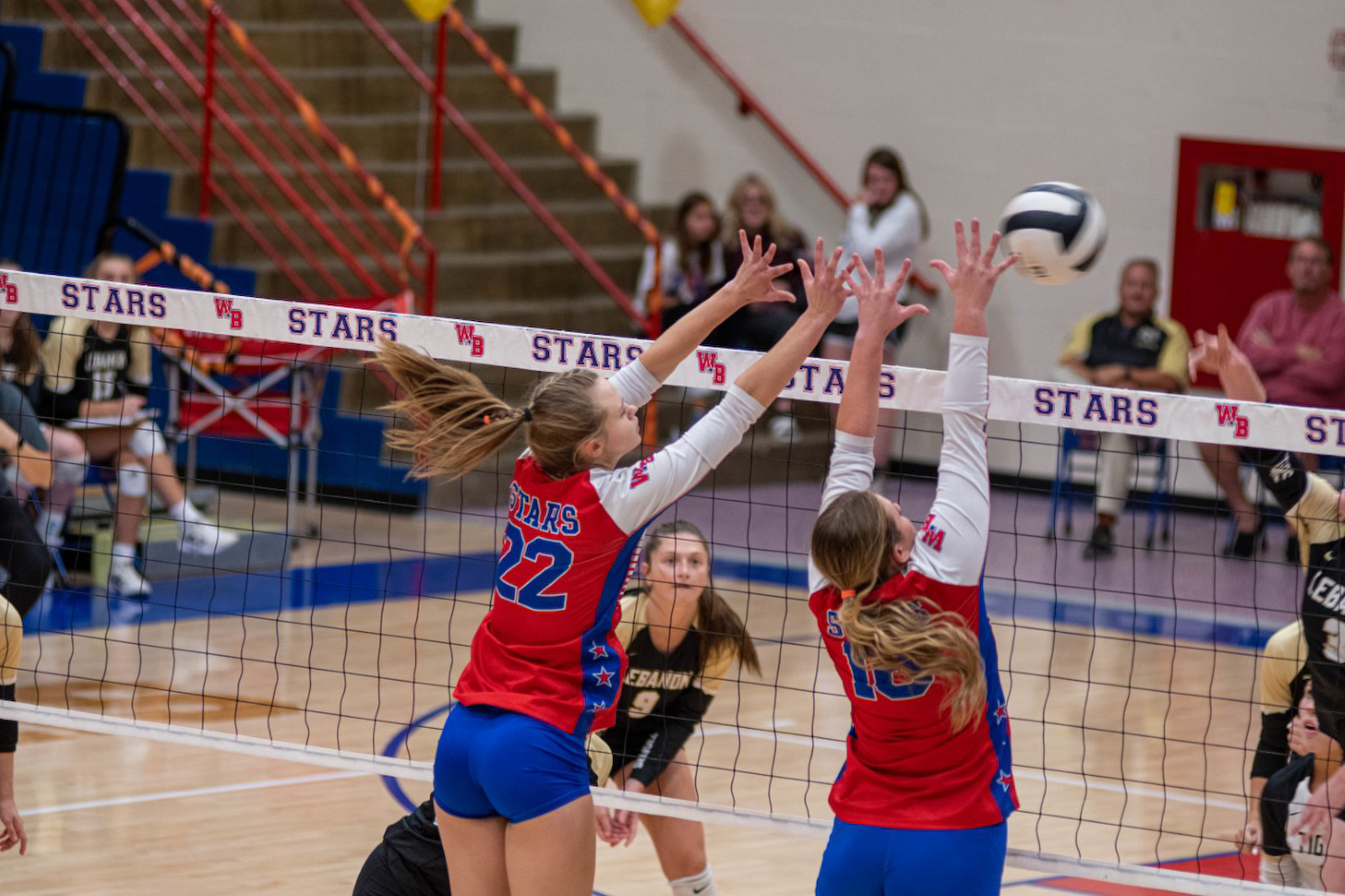 DOVER — Every year, the volleyball match between Lebanon and Western Boone is a battle. On Monday night, it was no different. After the Stars won the first set 25-13, the next two were back-and-forth competitive affairs, but both went to WeBo in a 3-0 (25-13, 25-21, 28-26). "The most important thing is we found a way to win," Western Boone head coach Laura Bragg said. "I'm really proud of my girls though, we had to really battle in the third, fought off a couple of set points and found a way to win." For Lebanon, while they didn't come out on top, there were a lot of positives the Tigers can take from the match. "Mentally, we are getting over that hump," Lebanon head coach Emily Vanatsky said. "We are getting past it and we are realizing we can compete with these good teams. We are preparing really well in practice and we are really focused. We are starting to do everything right." The third set was an instant classic between the teams. WeBo jumped out to a 6-2 lead early, but the Tigers closed within 9-7, then used a 7-1 run to take a 14-10 lead. Lebanon continued to hold onto the lead, going up 20-15 on a kill from Sydnie Starkey. WeBo closed a 21-20 on an ace from Elena Gubera, but the Tigers built up their lead to 24-21 and appeared ready to force a fourth set. "It was all about mental focus," Bragg said. "We knew that whoever won this match, it was going to come down to being mentally tough and taking that pressure in and not letting it affect them. We were able to finish it off." But after a side out, the Stars got kills from Saige Terwiske and Audrey Dunn to tie the set at 24. Lebanon had a set point at 25-24 that the Stars fought off. The Tigers then fought off a set point at 26-25, but a block by Alayna Christner and a kill by Dunn ended the match. "They have some big hitters that got some big kills in rallies," Vanatsky said. "We got a little down on ourselves when after long rallies we didn't end up on the right side of it. We kept battling, and fought off a match point, but they just had a few more skills that we need to work on." WeBo won the first set, taking control midway through and cruising from there. Leading 8-7, the Stars went on a 6-1 run, getting two kills from Raegan Durbin and one each from Dunn and Terwiske in the process. Lebanon got as close as six at 17-11 after a block by Grace Braner, but the Stars won eight of the final 10 point to take the set. WeBo was coming off a frustrating weekend, where they went 0-3 at the Brebeuf Invite and didn't win a set. Bragg said she liked the response her team came out with on Monday. "Even though we lost on Saturday, it showed us a lot of things," Bragg said. "It showed us we had to pick up our play for conference, and today we came out a little more focused and kept them out of system." The Tigers battled back in a competitive second set. WeBo led 14-10, but back-to-back Braner aces cut the lead to 14-13. WeBo built the lead back up to six on three-straight kills, getting one each from Durbin, Kennedy Kiger and Dunn. The Tigers got within 24-21, but couldn’t come back. Vanatsky said after a first tough set, her team started to play more the way they were capable of in the second. "We just had to keep swinging at the ball," Vanatsky said. "We gave them too many free ball in the first, and they were pounding the ball right back at us. We were able to keep them a little more honest when we played aggressive." Starkey led the Tigers with 10 kills, while Barr and Braner had five each. Audrey Butler had 13 assists, with Alli Albea having 12. Kylie Ottinger led the Tigers with 10 digs, with Butler adding nine. Lebanon travels to Brownsburg Tuesday. "This is a match we can build off of," Vanatsky said. "I think we showed ourselves we can compete with them. In the past, this rivalry has just been the Stars showing up and I think it's time for the Tigers to start coming out. I'm excited to potentially see them again in sectionals." Durbin had 12 kills and 11 digs for the Stars. Dunn added eight kills, with Terwiske having seven and Kiger six. Janie Ransom had 36 assists and five digs. Gubera had 11 digs, with Chloe Gillan adding eight. The Stars host Crawfordsville for senior night on Tuesday, then travel to North Montgomery on Thursday. "We just have to take it one match at a time," Bragg said. "Tonight was all about Lebanon. Tomorrow the focus is about Crawfordsville, and then we will go from there."