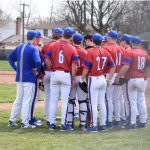 Thursday’s game against Lebanon was a heartbreaker for Stars, as they lost the lead late in a 10-8 defeat. The game was tied at six with Lebanon batting in the top of the fifth when Jonathan Moore drew a walk, scoring one run. Despite the loss, Stars did collect eight hits in the high-scoring affair. 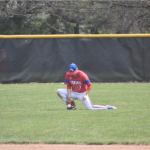 Western Boone varsity baseball opened up conference play on Tuesday when they traveled to Lebanon to face the Tigers. Senior Peyton Young took the mound for WeBo in his second start of the season. Young ended the game with 7 strikeouts, but struggles early on gave Lebanon a lead that they would sustain for the

The Western Boone varsity baseball team kicked off the 2019 season on Saturday, April 6, in a doubleheader against a tough 2A opponent in the Cardinal Ritter Raiders. In Game 1, Peyton Young started on the mound. The Stars were able to provide instant leverage on offense for Young with a 3-run first inning. Cardinal

No Events This Week

Events are added by athletic staff.
View All Events