Dover — Western Boone was in a good spot at the end of the first half Tuesday night when they hosted Brownsburg in a non-conference girls basketball match-up.

The Lady Stars had closed the first half on a 12-4 run, and found themselves tied at 26 at the break. The second half didn’t go nearly as well.

Brownsburg started the second half on a 16-5 run and scored 50 points in the final 16 minutes in a 76-48 victory over Western Boone.

“We had too many turnovers,” Western Boone head coach Rich Schelsky said. “We did a really good job for the most part defensively in the first half, but when you turn it over and allow the other team to have a run out, you can’t guard that. It just mounted up tonight. Our margin for error is so small against good teams. We have to really lock in and concentrate for 32 minutes, because just a little slip and the game can get away from you.”

Brownsburg led by two after a quarter, but built a 22-14 lead with 3:55 left in the first half when Naomi Hege split two free throws.

Western Boone countered back, scoring 12 of the next 14 points to take a 26-24 lead on a three-point play by Madison Jones. Hege scored with five seconds left in the first half to send the game to the locker room tied. 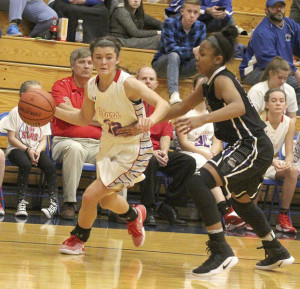 The Bulldogs set the tone for the third quarter early. Reilly Olmstead was able to steal the opening in-bounds pass and go in for a lay-up.

The Stars briefly took a one-point lead on a three-point play on the next possession, but Brownsburg went on a 17-3 run to take a 45-32 lead on a free throw by Olmstead with 2:09 left in the third quarter. Western Boone had seven turnovers and six points in the first six minutes of the second half.

“We missed a lot of easy opportunities in the first half and didn’t finish well around the basket,” Brownsburg head coach Debbie Guckenberger said. “We had to come out with a little more intensity defensively and our full-court press was key in giving us a spark in the third quarter. Just some of the little things we were able to do better in the second half.”

The lead was 16 at the end of three quarters and a 9-2 run midway through the fourth quarter put the game away for good for Brownsburg.

Western Boone managed just 22 points in the second half, including just seven in the third quarter.

When teams come after us and guard us, we have to slow our minds down and not let that speed us up,” Schelsky said. “A lot of that is just discipline. We have to make the simple basketball plays, that when team’s start guarding us hard, we get rushed and make poor decisions. We have to get that out of our systems.”

Hege led the Bulldogs with 12 points, while Olmstead and Veronika Roberts each had 11. Also in double figures was Devin Courtney with 10.

Western Boone starts conference play on Friday when they travel to Tri-West. Tip-off is scheduled for 6 p.m.

“Obviously Friday is our big game this week, not that this one wasn’t important,” Schelsky said. “We have to build on what we did in the first half. We played fairly well in the first half tonight. Friday night is going to be tough. It is a road game and I am sure they are going to be jacked up and we have to be able to handle it.”