By Will Willems Sports Editor

For the sixth-straight time, the Western Boone volleyball team played in the Class 3A volleyball regional on Tuesday. 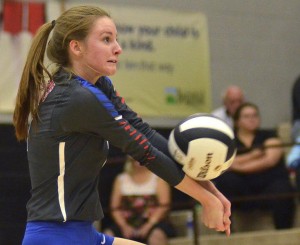 “I’m really happy with everything that happened except the loss,” Western Boone head coach Laura Lawson said. “We stuck to our gameplan throughout. We were aggressive with our serves, we attacked the lines and were aggressive. They were able to defend the lines a little better in the third and fourth sets and they just got a couple more points than we did in the fifth.”

Western Boone grabbed control in the first set and led 8-5 early. A kill by Callie Gubera put the Stars up 13-9, then the Stars extended the lead to 19-13 after back-to-back aces by Katelyn Coffman.

Northview got with 21-19, but back-to-back kills by Gubera gave the Stars then momentum they needed to close out the set.

The Stars dominated the second set, going up 9-2 right out of the gate. Northview got within 12-7, but the Stars built the lead to 10 with two Gubera kills around one from Emma Rolf.

WeBo ultimately closed the set on a 13-4 run.

“We improved so much from the first match of the year to today,” Lawson said. “The girls came in every day wanting to learn and get better and my coaching staff did a great job of teaching them and getting them in the right places to succeed on the court. They all played great today.”

With their season on the line, the Knights started to pick up their play.

They led 7-1 early in the third set, and ultimately led 20-14. A kill by Gubera got the Stars within 21-20, but the Stars’ couldn’t complete the comeback. In the fourth set, the set was close early, with a kill by Brooke Cummins bringing the Stars within one at 10-9, but Northview gradually pulled away the longer the set went.

“(Northview’s) serve receive got better in the third and fourth sets,” Lawson said when asked what the differences were. “We served pretty well throughout the match, but they received it better. They also defended the lines a lot better, so we had to adjust our offense.”

Northview took a 7-4 lead in the fifth set, but a kill by Gubera and a block by Rolf got the Stars’ within 7-6. After a point by the Knights, kills by Gubera and Rolf tied the set at 8-apiece.

The Stars led 11-9 on a kill by Rolf, but three-straight Northview points gave the hosts the lead again. The Stars came back and saw the set tied at 13, then saved off a match point at 14-13 down.

Western Boone led 16-15, but served the ball into the net, and Northview added two more points to win the match.

“Whenever you miss a serve on match point, it kills your momentum a little bit,” Lawson said. “We came back and rallied the best we could in the next couple of points, but they were able to win them.”

Gubera finished the match with 20 kills and 23 digs. Rolf had 14 kills and 16 digs, while Kendra Nicley had six kills and 21 digs.

Cummins had 52 assists to go along with six kills and four aces.

“I am going to remember the determination and fight of the girls,” Lawson said. “We had a tough schedule, and we were in almost every match. We took some points and pushed some really good teams and continued to be aggressive.”

The Stars lose Gubera and Calista Porter to graduation, but should return the rest of the team next year.

Northview advances to the Jasper Semi-State.