LIZTON – An anatomy of an upset in soccer can look something like this: Score two unlikely goals early and maintain a strictly defensive posture the rest of the way and hold on for the win.

Western Boone girls’ soccer executed this exact scenario Saturday to defeat favorite Tri-West, 2-1 and take home a sectional championship for the second year in a row – both coming against the Bruins.

The frustrating loss for the season unbeaten and sixth-ranked Bruins was reflected in the tears of several Tri-West players and in Tri-West coach Elainna Kish’s thoughts afterward.

“This stinks,” she said. “I am tired of losing to them in the finals. We had a few good opportunities to score in the first half, we were super unlucky on some shots and the wind was blowing in our direction and we didn’t adjust to that.” 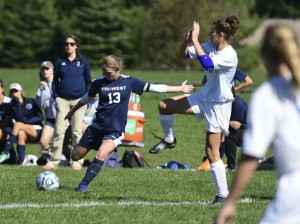 Tri-West was able to dominate play in the first half despite being down. The Bruins had eight shots on goal, including one that smacked the goal post, compared to just three for the Stars. Possession of the ball and field positon also favored the Bruins.

But other elements were at play, and would prove to derail the Bruins and line things up for the Stars.

The wind was a factor all game long, blowing steadily from one end of the field to the other – at the Bruins back the first half and blowing toward them in the second. Being down 2-0 after the first half, Tri-West would have to contend with the wind as well as Western Boone’s defensive alignment.

The Stars’ strategy of dropping as many players it could to defend became an added barrier that would prove too large for the Bruins to overcome. The Stars also double teamed Tri-West’s leading scorer Lexi Turner at every turn. 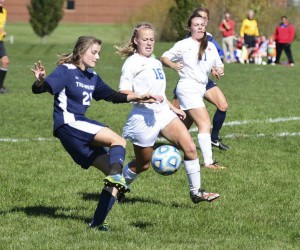 With things getting more physical in the second half – three yellow cards were issued in the last 40 minutes, the wind working against them and Western Boone’s smartly dropping back on defense, the chances for Tri-West to stage a comeback slowly began to dissipate.

A yellow card issued to the Stars’ goalie early in the second half set up Tri-West’s lone goal. Brianna Pickens for the Bruins blasted in a penalty kick to make it 2-1.

The Bruins finish the year 14-1-1 and undefeated in Sagamore Conference play.