The Western Boone high school cross country team traveled to North Montgomery to compete at the Charger Classic on Thursday evening.  The Lady Stars turned in excellent performances and earned a third-place team finish out of 14 teams.  North Montgomery won the girls’ team competition with 53 points, followed by Fountain Central with 78, and then close finishes for the next three teams:  Western Boone with 85, Seeger with 86, and Hamilton Heights with 89.

Senior captain Alexis Goglia, running with confidence and in one of the best-executed races of her career, led the Stars with a second-place individual finish in 21:36.  Lizzie Hendricks and Holly Foxworthy stepped up in a big way to fill in for teammate Krisha Griffith, who felt ill during the race and finished in a lower-than-usual 27th.  Hendricks and Foxworthy both achieved personal best times and finished in 23:51 (17th) and 23:58 (19th), respectively.  Foxworthy’s time was a significant 28-second improvement for her.  Kylie Dobbs rounded out the Stars’ scoring team with a 38th-place finish in 25:36.  Pushers Abbigail Merrill (41st) and Josie Mahin (48th) also ran well, with both girls beating the final scorer for Seeger, and Merrill also beating the final scorer for Hamilton Heights–which contributed to the team’s narrow victory over those two teams.

In the girls’ junior varsity race, all three of Western Boone’s girls earned personal bests.  Brittany Hieston led the way with a fourth-place finish in 26:23, which was a 1:09 improvement for her.  Olivia Richardson ran 30:35 to cut 0:46 off of her previous best.  And Heather Clark had the biggest improvement of the night, running 34:07 to lower her time by 1:31.

In the boys’ race, the Stars’ team placed 7th with 181 points.  Seeger won the boys’ team competition with 49 points.

The Stars will compete at the Ben Davis Invitational on Saturday. 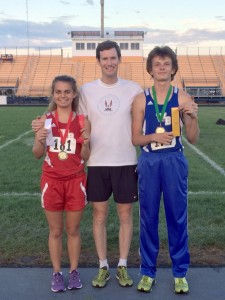 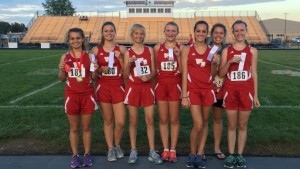