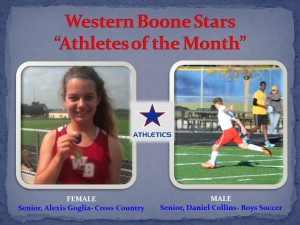 Senior Captain Alexis Goglia is our August female student-athlete of the month. She has had an outstanding month of August. Her results so far:

Male Student-Athlete of the Month- AUGUST

Senior Captain Daniel Collins has been named the Student-Athlete of the Month for August. Daniel started the season for the boys soccer team on a record setting pace before suffering an injury. Daniel scored 8 goals in three games before being sidelined. The Stars won all three of those games and carry an overall record of 4-2.

CONGRATULATIONS TO ALEXIS AND DANIEL.