Official Sponsor
This past weekend, Webo Head Girls Varsity Basketball Coach, Rich Schelsky was a featured speaker at the Annual IBCA Clinic at Lawrence North High School.
Schelsky steered Western Boone to an 18-6 record that included a sectional title. He is 66-22 in four seasons with the Lady Stars. 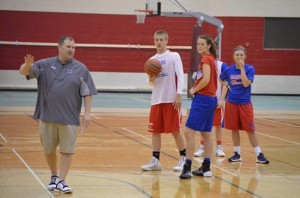 Rich Schelsky has compiled a 66-22 record in four seasons as girls’ basketball coach at Western Boone, including an 18-6 mark in 2013-14 that was highlighted by an appearance in a Class 3A regional final.

A 1993 graduate of Rockville High School, the 39-year-old coach played basketball and baseball for the Rox. He scored 1,272 points in his basketball career for Rockville and later attended Indiana State.

Schelsky began his coaching career at Rockville, serving as a boys’ basketball assistant for five seasons (1997-2002) and the boys’ basketball head coach for one season. His Rox went 10-13 in 2002-03.

Schelsky currently works as the junior high athletic director at Western Boone. He and his wife, DeLisa, have three children – Treigh (7), Birkley (5) and Kelby (1).