Congratulations to Western Boone seniors, Austin McCloskey and Emily Harrison on signing their NCAA Division I national letters of intent. 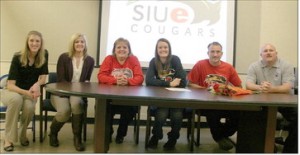 Harrison, arguably the best player to ever don the Western Boone volleyball uniform has officially picked her college. Star senior outside hitter Emily Harrison signed her national letter of intent Tuesday to play volleyball at SIU-Edwardsville.

“It feels really good,” Harrison said. “It is a lot of pressure off of me. I had a lot of decisions on what path I could go on, and I think I made a really good decision because I love playing volleyball, I love the coaches there, I love the campus and it has a really good program for what I want to major in.” Harrison, who also considered Morehead State, IUPUI, Akron and Kent State, said SIU- Edwardsville stood out from all of the other schools. “Definitely the team chemistry,” Harrison said of what stood out. “I really got along well with the team there. Also the coaches, they live by the same philosophies that my coaches here live by. I matched with them really well.”

Harrison said that the Cougars coaching staff liked how she can play multiple positions. “They liked that I am a versatile player,” Harrison said. “I can play any position they put me in. That, and I have the drive to get better and win.” Those sentiments were echoed by SIU-Edwardsville head coach Leah Johnson.

“Emily is a true left-side attacker,” Johnson said in a news release. “With her size, we add a physical presence on the pin. Emily has great ball control and great shot selection. She has the volleyball IQ of a great outside hitter. Her versatility is going to be a huge asset, but I’m most excited about her ability to contact the ball with control and terminate.”

Harrison has been a two sport star while with the Stars, being an all-conference player in not only volleyball but basketball as well. She said it is going to be an adjustment focusing on just one sport next year. “It will be different,” Harrison said. “I will always have a passion for basketball, and it was a really hard decision to choose volleyball — but I think I have just a little more passion for it. I will really miss basketball though.”

Harrison had 1,733 kills in her Western Boone career and 241 solo blocks. She also has the school record with 965 career digs. She helped Western Boone win three-straight conference and sectional titles. “I have so many memories, so many friendships and so many lessons that each coach has taught me,” Harrison said of her time at Western Boone. “I will never forget here and the experiences I had; it will be like nothing else.”

Harrison will have one more chance to represent the Western Boone volleyball team this Sunday. She was named an Indiana All-Star and the game will be played at Perry Meridian Sunday afternoon.

“It will be really cool,” Harrison said. “It is a 3A/4A team and I am only one of two girls from a 3A. So it is a lot of bigger schools and bigger girls. But I am excited to represent our small town Western Boone and go out and show them what we are made of and what we exhibit here at Western Boone.”

Harrison said she plans on majoring in sports marketing. 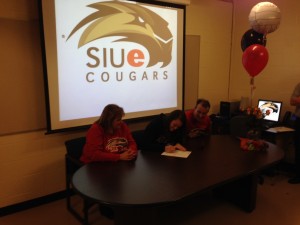